I’ve been thinking about memories a lot. I just finished the book Recursion by Blake Crouch. He wrote the excellent Wayward Pines series (which was later turned into a really bad Fox show). He also wrote Dark Matter, which is not a prequel but kind of a precursor to Recursion.

Recursion is about how memory is everything. That without memories, we cease to exist. It’s a science fiction novel, yes. But it’s that particular brand of science fiction that is rooted in just enough Actual Science to mess with your head a little bit. Or, in my case, mess with my head a lot.

I’ve always had a weird relationship with my memories. I’ve moved around a lot, I’ve lived in too many places, and I’m naturally a nostalgic person. In a way I’ve always felt like I’m in a Fog of War video game that I’ve explored too quickly and now there’s no turning back. For that reason I’m prone to silly things like Sunday Night Blues and listening to Phil Collins’ “Take Me Home” over and over (and over) again while I remember the past. I don’t know, it makes me feel safe. As Counting Crows said:

If dreams are like movies then memories are films about ghosts.

So back to the book — I am intrigued by this idea that even the present moment is just a memory, and that reliving memories is a form of time travel. I’m not going to spoil the book, but I am going to say that it takes that idea too far (in the best possible way), and that it’s making me take a real hard look at my propensity to live too viscerally in my past experiences and regrets.

I read Digital Minimalism: Choosing a Focused Life in a Noisy World by Cal Newport over the weekend, and it exceeded my expectations. I was a little worried it would just be a re-hashing of his previous book Deep Work, through a slightly different lens, but it’s not that at all. Cal brings in lots of psychology, and provides practical (and pragmatic) recommendations for cultivating a better relationship with technology.

He also draws heavily from the experience of about 1,600 people who undertook a 30-day “technology declutter” during the research phase for the book. Cal uses their stories to share what worked for them, what didn’t work, and ways to address some of the most common pitfalls of trying to become a digital minimalist.

I won’t lie, this book is scary. It’s making me rethink every single online service I use, and I realize that I’m going to give up a lot of it. But I also somehow feel lighter and freer, having come to those conclusions.

Cal isn’t dogmatic in his approach in this book. He lays out the evidence for why the intermittent positive reinforcement and drive for social approval that are built into social media is detrimental to our mental health and relationships. He gives practical advice on how to choose and use the tools that will provide benefit to you. But then he also tells you to use the principles behind what he’s saying, but do what works for you. I really appreciate that.

Below are some of the quotes that I wanted to remember. 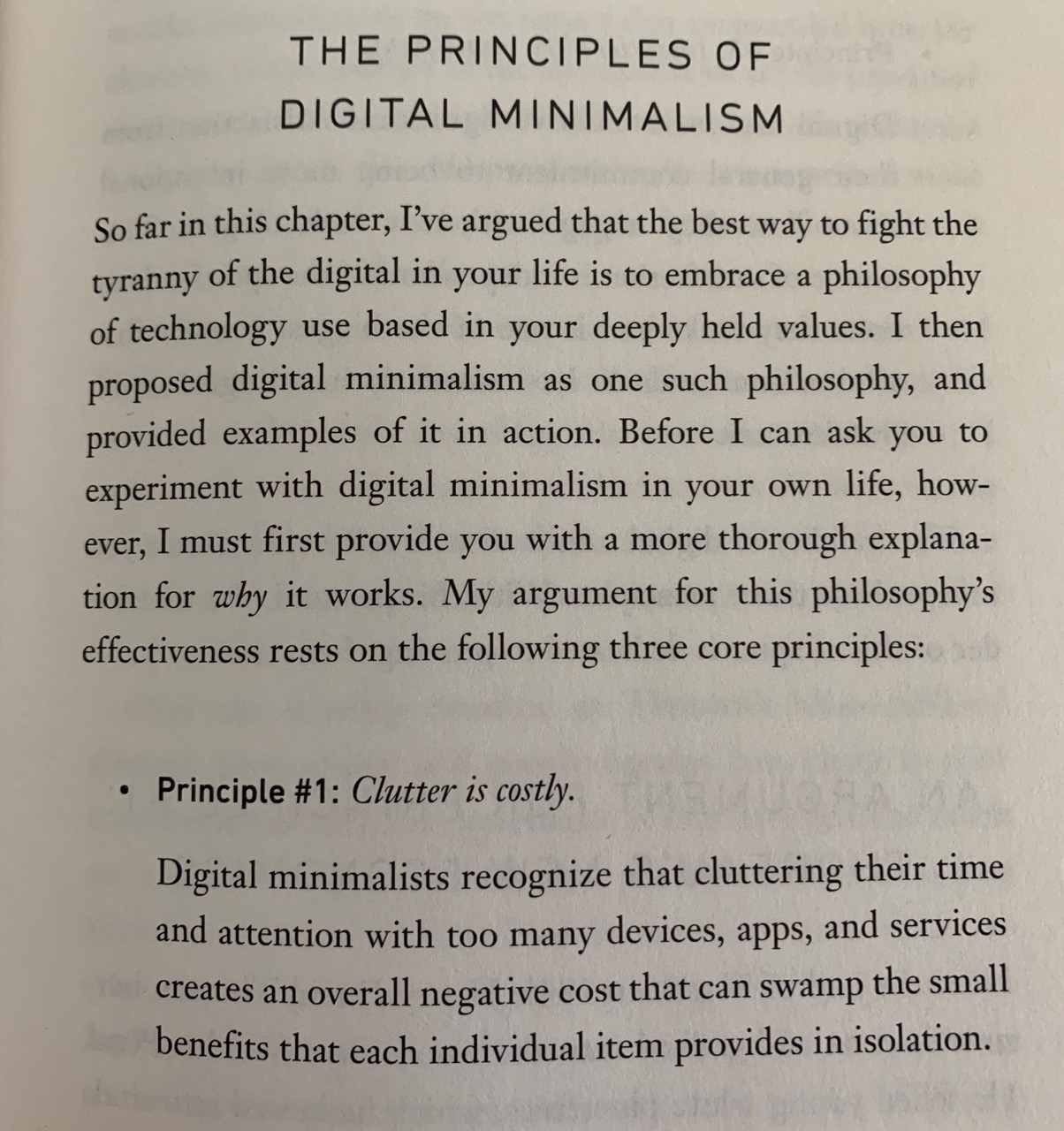 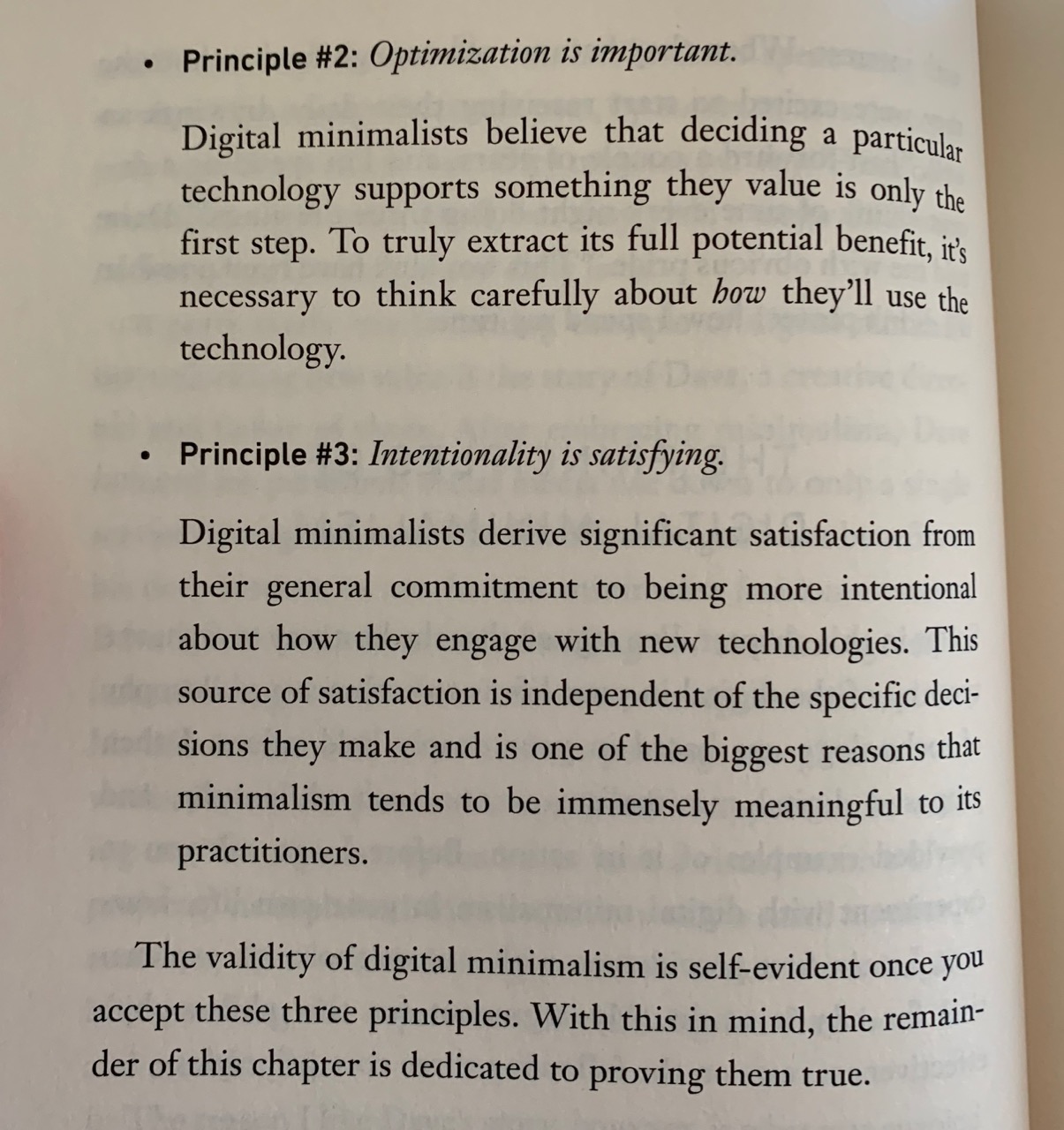 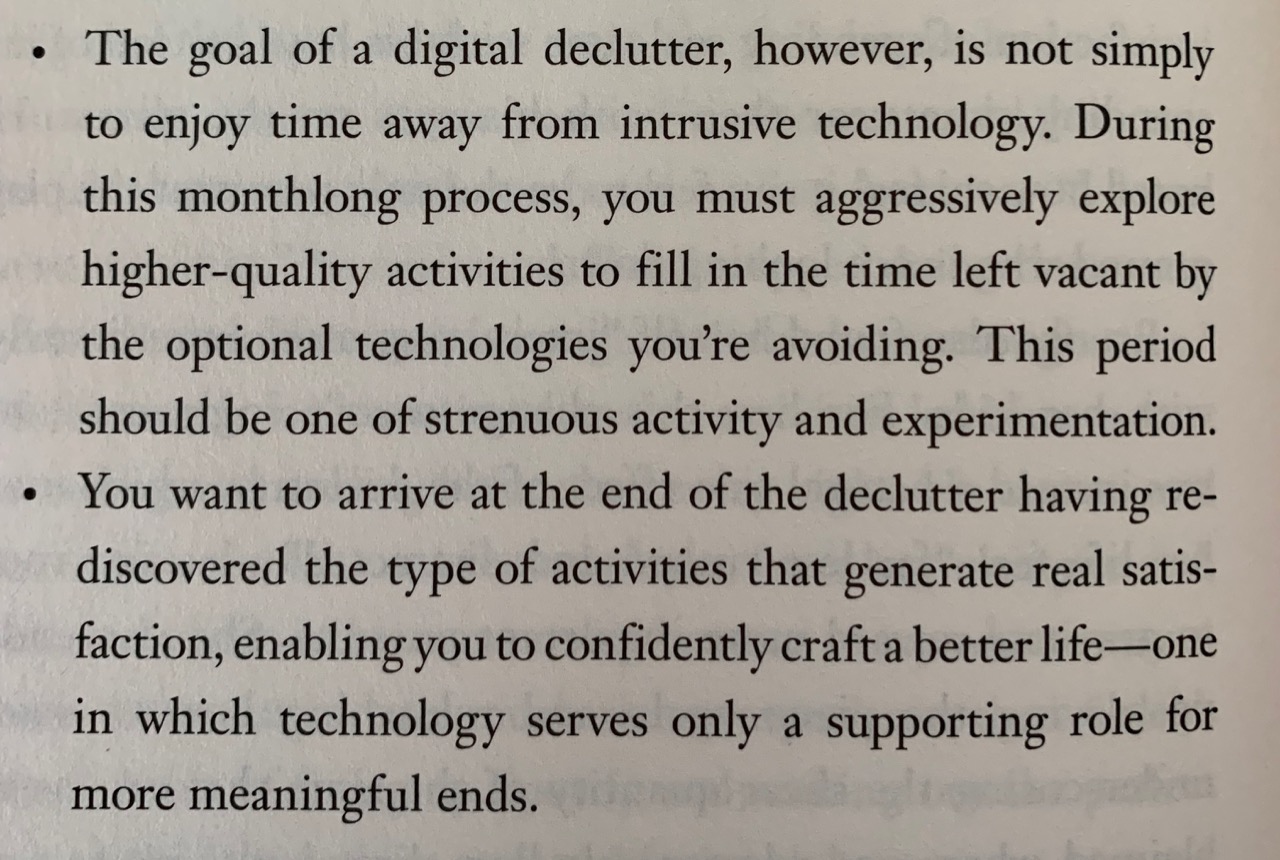 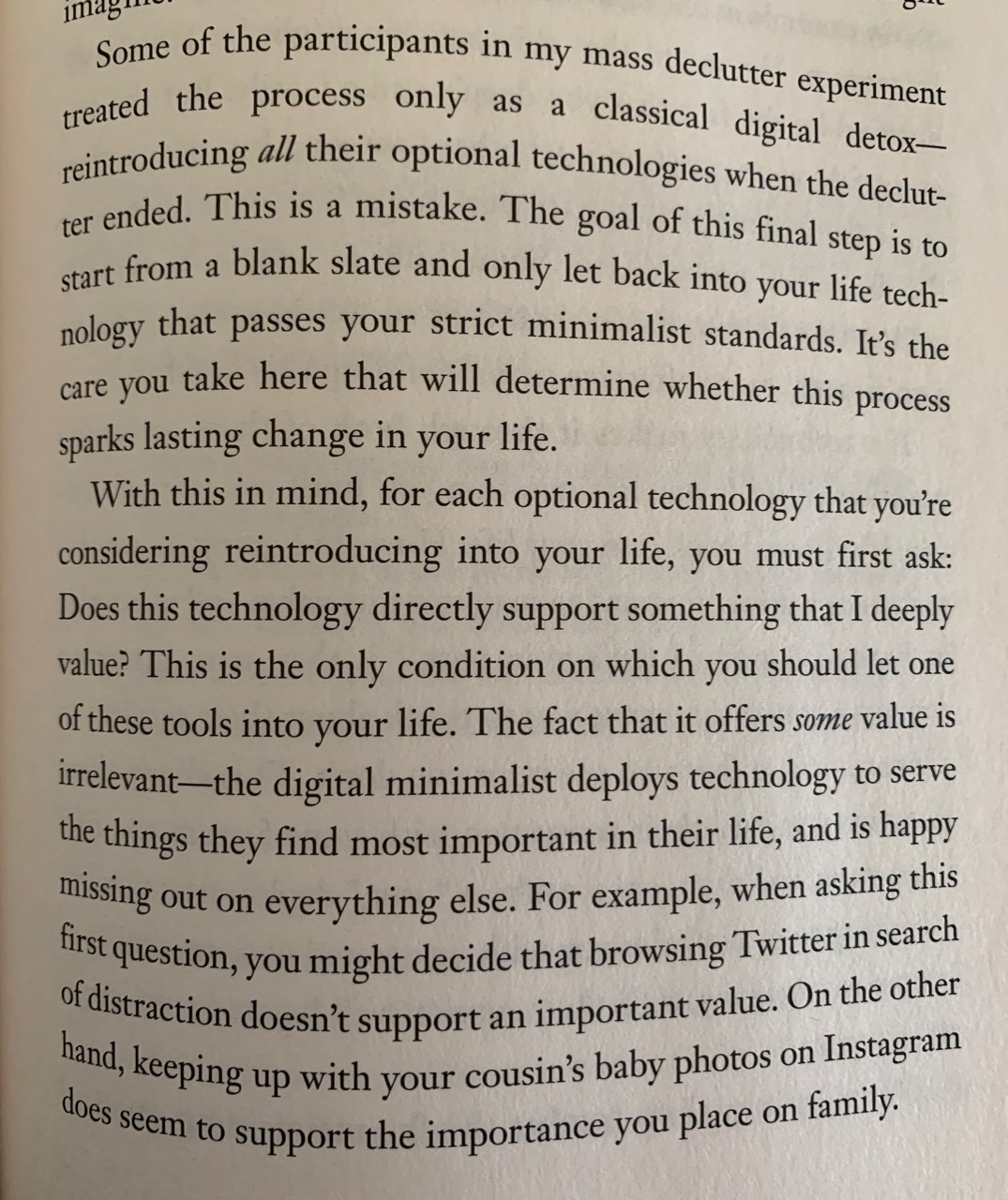 The best way to use social media is to act like a 19th-century Parisian is an excellent essay, and it’s worth reading the entire thing. The setup:

If you’re not quite ready to quit Facebook, Instagram, or Twitter, a more measured approach is to treat virtual spaces more like a bustling street—a place where, like a flâneur, you can pick up a lot of information by observing the action, while being more reticent to offer opinions and circumspect about posting.

The 19th-century German philosopher Walter Benjamin likened the flâneur to an urban investigator, within the city but detached from events, the quintessential modern artist citizen.

I love that phrase “within the city but detached from events.” That would be my desire for my own experience with social media. It’s worth reading up on the concept of a flâneur — sometimes referred to as “a connoisseur of the street” — which is a very apt analogy:

While Baudelaire characterized the flâneur as a “gentleman stroller of city streets,” he saw the flâneur as having a key role in understanding, participating in, and portraying the city. A flâneur thus played a double role in city life and in theory, that is, while remaining a detached observer. This stance, simultaneously part of and apart from, combines sociological, anthropological, literary, and historical notions of the relationship between the individual and the greater populace.

And this is some solid advice right here from the original article:

But operating under the influence of the masses clearly has deleterious effects on our thinking and behavior. By simply refusing to provide the desired engagement, or at least slowing down the pace of our interactions and taking time to think, we can collectively, and very politely, undermine the expectations for empty affirmations and recognize the effects of groupthink. This could change the tenor of the cultural conversation and make actual engagement meaningful again.

My side project for the past month or so has been to try to extract myself from centralized networks by digging into the IndieWeb movement. I have a lot more to do and learn, but I’m at a point where I wanted to take a step back and reflect on the process a little bit.

First, I want to talk about my current setup. There are so many different ways to go and decisions to make that I find it helpful when others have shared the direction they’ve taken. So here’s how it currently works:

I think it’s worth pointing out a fairly significant issue I came across with images. The Micropub endpoint I use doesn’t have support for the media endpoint yet. This is a bit of a pain because it means I can’t post photos through Quill or the Micro.blog iOS app by simply uploading the photo. Instead, I use a Siri shortcut on my phone to upload photos to my Amazon S3 bucket.

The shortcut does the following when I run it on a photo:

That is obviously, well, really inefficient. You can see a video of the whole process here (obviously the TinyPNG API is a little slow). So, yeah, support for the media endpoint would be amazing.

So with all that said, here are a couple of observations. As I mentioned on Twitter, the process humans have to go through to “own our content” is currently in the chasm, and I don’t think it will cross over into mass adoption until we make it way easier.

But that’s not a criticism. I had a lot of fun discovering how all of this works, and I like this setup a lot. I am grateful to the IndieWeb community, and encouraged that such a thing is even possible. I just want more people to see the value of “Publish on your Own Site, Syndicate Elsewhere”, and yet I realize it’s still way out of reach to most people.

I, however, am sold. So if there’s anything I can do to help spread the word, I’d love to hear it.

Onward to the open web…

As a vinyl collector I read Why We Collect And What Your Collection Says About You with interest. This part jumped out at me:

Cultural historian, Mihaly Csikszentmihalyi has also argued that we collect and hold onto things because they keep us grounded in the present and help us remember the past. Your collection and the items you curate could even go some way to informing your own sense of identity and how you see yourself. These items that he terms “continuity of self” help construct memory and personality. “Without external props, even our personal identity fades and goes out of focus. The self is a fragile construction of the mind”.

One of the interesting things my wife and I discovered over the years in our discussions about music, is that there is a fundamental difference in how we view the purpose of the music we listen to. I listen to music to reflect the mood I’m in. My wife listens to music based on the mood she wants to be in. There are exceptions, but that’s been our experience for the most part. So when I’m feeling down or overwhelmed, I turn on music that reflects that. For my wife, she would instead prefer to put on “happy music”.

I mention this because I think it’s another dimension to this need I feel for collecting vinyl. I see that shelf of vinyl as an anchor and a reflection of who I was and who I have become. It’s so much more than the music it contains. But at the same time I totally understand why some people think that collecting vinyl is a crazy thing to do. If you are not big on nostalgia — if, like my wife, you listen to music as a forward-looking activity, not a reflective activity — collecting things from your past would seem pretty silly.

But as they say, to each their own. I guess the only rule is this: use music in whatever way helps you. And don’t try to force other people to view it the same way.